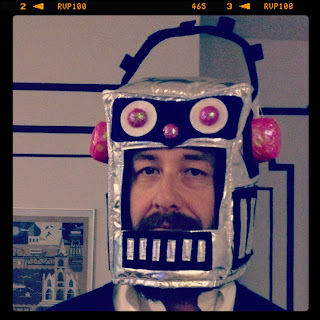 Thursday's guest post from Boyfriend looks back on some of the best of 2011. In his mind anyway.

The year is over and you are so tired of list. Oh well I want to share mine, so you have to deal with one more. Instead of a best this or top 10 these I’ve opted to go with some of the people places and things that discovered and enjoyed this year. Some are unexpected some are some aren’t. They were all bright spots in an tough year. This is in no particular order.

Spotify  www.spotify.com
This thing is great. My life used to be dominated by music, it was my main interest. I loved going to shows, I read tons of music magazines, and of course I had a huge record collection. I was after all a record store clerk for several years. At some point a few years ago (no doubt after lugging 1000’s of lps through another move) I fell way out of love with music. Long story short I sold the record collection and mostly listened to talk radio. iTunes came along and the way we listen to music changed. This fit very nicely minimalist ethos as well as my return to music enjoyment. This summer a new online service appeared called Spotify. The internets were a buzz finally Spotify was in the US. All the cool people knew about it from being in Europe but it was new to me. It took a while to warm to it but now I am addicted. It is the perfect format for someone like me who has a short attention span and wants to listen to a lot of different music in one sitting. I have access to loads of music and I don’t have to own a bunch of things that take up space. I’m so plussed on Spotify that today I signed up for the premium service.

Carhartt Vest
In case you didn’t know, I like things that are very functional. While I’m a fashionable guy my taste lean towards simple functionality. Back in February or March I started coveting a Carhartt vest at the Army/Navy store down the block from our house. It was a bit pricey for me at the time and as we were moving around that time I didn’t feel good about spending money on myself. With winter coming to a close I was especially hesitant as one who needs instant gratification I don’t buy things for upcoming seasons. Finally, I went for it and bought it. I am so happy I did. This simple black workman's vest is perfect for temps from 60 degrees all the way down to freezing. I wear it almost every day and it looks quite smart on me I’m told.

Uniqlo Oxford Shirts
These are form and function plus economy rolled into one.

Greenpoint
I was not surprised by this one. As we all know, when the subject of moving in together first came up your MatchGirl made it VERY clear that this would be in Greenpoint. This was and is totally fine by me. A neighborhood I knew little about has become mine. I am proud of it and love exploring and learning about the history of our little part of Brooklyn.