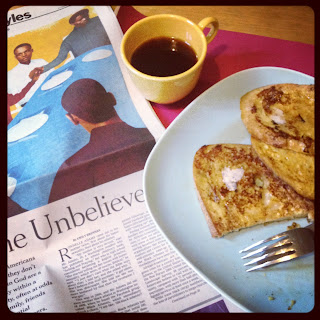 Gentle readers, we've been doing really well with the menu plans, especially and Boyfriend and I spend more time together working on them.

Now that wintery weather has finally settled onto Brooklyn, our minds are turning to cozy comfort foods. The bad thing about them is that they're often heavy. This week's menu plan has a nod to all the things you want to eat when it's chilly, but with slightly healthier additions.

Monday: Stewed Kale (it's a superfood, you know) and tomatoes over pasta

Wednesday: Boyfriend has plans with friends, so I will probably have leftovers.

Thursday: We both have work holiday events to go to, so we'll be eating out.

Saturday: We're going to an early birthday party, so we'll snack on the way (and if we drinka bit too much, probably on the way home, too!)

What do you have planned for dinner this week?


Photo: coffee, French toast and the New York Times
Posted by Unknown at 7:45 AM