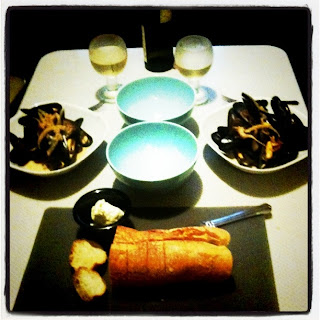 Gentle readers, we've gotten to week eight of menu planning and something amazing has happened. Boyfriend has taken the reigns! Not that has not been a contributor to previous menu plans, and I've already shared with all of you what a cook he is (and what a catch, ladies!), but this week Boyfriend mentioned that he wanted to be more active in the menu plan for the week. So most of this week is Boyfriend's plan, and he's doing the grocery shopping, too.

Saturday: We had a lovely dinner with our friends Dan and Alice and their son, in Greenpoint. It made Boyfriend jealous of Dan's grill.

Sunday: Boyfriend made a casserole of chicken breast, wild rice and veggies.

Monday: Spring Pasta from 101 Cookbooks. Boyfriend liked it a lot last time we had it.

Thursday: Boyfriend is going to make fried fish sandwiches with a recipe he found in Esquire Magazine.

Oh. And week seven? We were so good and stuck to the plan the whole week! And Thursday (a day I was at work around 7AM and left after 5PM) Boyfriend surprised me with one of my favorite meals - mussels and white wine a loaf of crusty bread. I told you ladies...  he's a catch!
Posted by Unknown at 9:19 AM