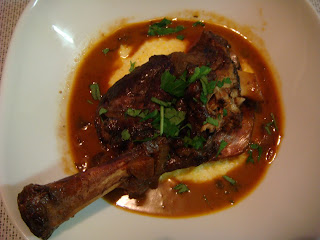 All right, gentle readers, your MatchGirl knows that you have been sitting on pins and needles wondering how well Boyfriend and I did with keeping up with last week's menu plan. And the answer, is, pretty well!


To recap: Saturday we went to Sel de Mer on Graham in Williamsburg (it's where we had our first date) and Sunday Boyfriend made an amazing Osso Bucco with a creamy, cheesy polenta (sorry, ladies, he's taken!). Monday we both had plans, so I made myself a quick salad with some leftover greens and a small piece of steak leftover from the previous week. Boyfriend had takeout with a friend. Tuesday we had some late night Brooklyn Mac after having drinks in Manhattan. Wednesday, instead of me making my signature "kitchen sink" friend rice, Boyfriend made swordfish steaks (which I marinated earlier in the afternoon), which we ate with some Kennebec mashed potatoes and new asparagus that we'd picked up on Saturday at the McCarren Park Greenmarket. Thursday I had plans so Boyfriend had a burrito from his new favorite take-out place and I made some pasta when I got home around 9:30PM. Friday night we had plans so we went to Lokal for a bite before heading out (Bad move - we each had a salad and they were greasy and just not that good. The atmosphere is nice and the staff is great, but the food, seriously, always disappoints me).

So. We did OK. We had to move some things around, but we didn't have to run out and get extra things that were not on our shopping list - and a big part of meal planning is keeping your food costs down! I looked at the Org Junkie Menu Plan Monday site for some inspiration, but I really don't see a lot of people menu planning for two, so I guess I will keep on trucking! And one thing we certainly want to do is start incorporating breakfasts and lunch into these plans to really keep the costs down.

This Saturday, we didn't make it to the Greenmarket, as we have guys working in our apartment and someone needed to be there. So your MatchGirl had to pick everything up at the grocery store (we've been hitting the Key Food on McGuinness). So? What did we come up with?

Sunday: It's supposed to rain all week, so I think I'll make this mushroom and herb strata for dinner and serve it with a salad with a really simple homemade vinaigrette. And instead of cutting the recipe, I'll make the full recipe so I can have lunch during the week.

Monday: I love meatless Monday. We're (obviously) not vegetarians, but I think it's kind of fun to have a theme here and there to push what you would normally make. I have long loved 101 Cookbooks are her veggie fare, so I'll make a take on this Spring Pasta Recipe, with some things we have in season and local now.

Tuesday: I have the Community Managers Meetup, so Boyfriend is on his own for dinner. I'll grab some pizza or a salad either on my way there or my way home.

Wednesday: I'm going to keep with my Asian-inspired, clean out the fridge theme and riff on Cathy Erway's Radish BiBimBap from Not Eating Out In New York.

Thursday: Boyfriend is in charge and will make something fabulous. I'm a little bummed that I had no idea what it would be as I was writing this blog post (and assembling my shopping list), as it kind of throws the menu plan off a bit - but Boyfriend is a great cook and he'll come up with something good for us to eat. I am sure it will be some meaty goodness and may include some of the red sauce he made the other week (that's been living in the back of the freezer). Or maybe he'll make this.

Friday: I know as I type this that the week will be a long one and that Friday I will drag myself home from work feeling exhausted. Boyfriend will be in a similar boat. All I will really want to do is curl up on the couch and watch some internet TV or read a book, so I think I will make this Real Simple Sweet Potato and Brie Pizza again and serve it with a salad on the side and a bottle of wine. We can have a lovely Friday night of laying low, or we can go out if the mood strikes, but either way we'll be fed - quickly.
Posted by Unknown at 9:19 AM