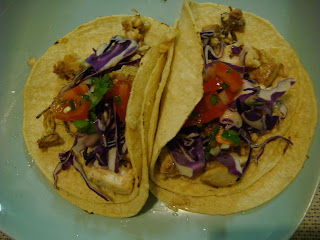 Gentle readers, you must like the menu planning for two posts. They certainly get the most page views every week! this is heartening as it is one of the posts that your MatchGirl spends the most time on. And an important part of the time that Boyfriend and I have to spend together.

So, let's recap Menu Plan: Week Four and see how we did. Saturday Boyfriend whipped up some fish tacos using swordfish leftover from earlier in the week. Sunday I made the mushroom strata (and ate leftovers for lunch and snack throughout the week). Monday I made the spring pasta, which Boyfriend dug, but I thought could be better - will certainly add it to the repertoire as it was fast and easy and filling, but will figure out my own tweaks. Tuesday we were on our own and grabbed takeout on the run. Wednesday I made the Bi Bim Bap inspired rice and radish dish. We both really liked its simplicity. With the orange yolked eggs from the Greenmarket, it was filling and really pretty. Thursday was supposed to be Boyfriend's chance to shine, but a work meeting came up last minute. I ate some leftovers and did some work on my laptop for dinner. Friday we were supposed to have Brie and sweet potato pizza, which we made in week one, but we had a last minute invite to an art show, so I scarfed down the remains of the strata and Boyfriend grabbed a pizza slice as we headed home.

Saturday: We attended a wedding reception in Greenpoint and grabbed a bite between running errands and heading to the reception.
Sunday: Brie and sweet potato flatbread with a little green salad.
Monday: Boyfriend is planning shrimp and grits
Tuesday: Boyfriend on duty again, with plans for pulled pork sandwiches and a potato salad (your MatchGirl will make that) with blue and red potatoes from the greenmarket.
Wednesday: Thinking of a riff on this artichoke ravioli recipe (using ravioli I bought at Trader Joe's a couple of weeks ago and are hanging out in our freezer). I will probably add some asparagus to it, as
Thursday: Boyfriend will make tacos from the leftover pork.
Friday: I'm not sure about Friday, dear readers, I'm not going to lie. I am envisioning a pasta with some fresh veggies and some of Boyfriend's delicious red sauce. Something simple, involving stuff in our pantry.