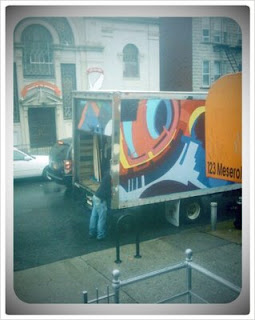 Boyfriend and your MatchGirl hired Intense Movers! of Williamsburg to handle our move. As your MatchGirl had purged a lot of her belongings and the majority of her furniture, in order to create a home that belongs to her and Boyfriend together, instead of populated by the ghosts of past lives, the move consisted mostly of boxes of books and clothes and kitchen supplies - of which your MatchGirl has quite a lot.

The final count on boxes was about 50, of varying shapes and sizes - some procured from a shipment of swag at work, some from the pet supply shop and bodega near my old space and still more donated from friends who recently made the big move from Brooklyn to family friendly Maplewood, NJ - and a bit of furniture. There were a couple of small tables, a big vintage wing chair, a 60s style Lucite stool and a dresser, amongst other things.

Dan and Dan showed up on time, in the drizzle of April 1st. We were running a few minutes behind getting back to the apartment, after having dropped Jarvis off at our new place, but Dan and Dan were laid back and totally fine to wait five minutes for us. They moved everything out of my third floor walk up in no time - with great attitudes, joking with your MatchGirl and Boyfriend and chatting as they went along their business. We met them back at the new place and they were done in a flash.

In fact, I decided I would go to Rite Aid while Boyfriend supervised the rest of the move, because there were a few things I knew we needed and I figured it would be a good use of my time, instead of sitting around with Boyfriend. No sooner had I gotten into the ever-slow line at Rite Aid and Boyfriend phoned to tell me the guys were done and I should come back to pay them (your MatchGirl had the cash).

The whole thing, start to finish, took just over three hours. Nothing was damaged. Their attitude was great. If your MatchGirl moves again, she will definitely hire Intense Movers! and suggests that if any of you are thinking about moving, you do the same.
Posted by Unknown at 9:12 AM