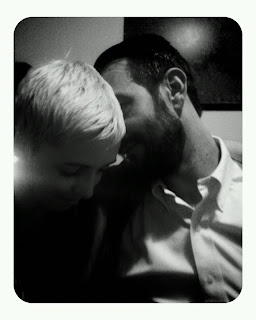 One of the most amazing things, gentle readers, is having someone to support you. In building a home with someone, you often lose track of the things that are important to a relationship. They get lost in the day to day conversations of grocery lists and errand running and bill paying and cleaning the bathroom and throwing moldy food out of the fridge...

Your MatchGirl is very grateful that, though she and Boyfriend deal with all of these day-to-day things, that we still make time to lean on one another. We don't have a television right now (not to say we don't love television, we both are big fans of the medium) so every night we spend time together, having dinner face to face, and then sharing a drink on the couch and chatting, many nights, till bedtime. As we have the ups and downs that go with every relationship, and after we buy a television (there's just no need in the summertime! New York is so very busy!) I hope that we are still able to turn it off and look each other in the eye and really talk.

The past few months have been a remarkably transitional time for both Boyfriend and your MatchGirl. There have been a lot of changes in work and lives. We've had a pet die. We've seen friends marry. We've toasted pregnant bellies (not ours!!) and held newborn babes. There have been highs and there have been lows. And through it all we have had each other to lean on, to support.

That's pretty lucky.
Posted by Unknown at 9:19 AM