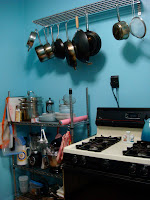 Gentle readers, your MatchGirl likes to share, from time to time, the progress that she and Boyfriend have made in turning our little apartment into a home.

I'm going to tell you, when we did not have everything perfectly settled within the first couple of weeks, your MatchGirl was a bit stressed out. The idea of things taking time, and the fact that some of that time, since I now have a partner, is entirely ou of my hands does not sit so well with your MatchGirl's Type A(ish) personality.


But progress is being made. Slowly, slowly, but surely. We've got the kitchen almost all the way to where we want it to be. A little work station is still in order, but, for the most part, we've figured out how to work in the little space (a lot of which has to do with really paying attention to where we put things away). We've painted the dining nook and lived with it for a while now. The art, all of it, is left unhung, but we've figured out, for the most part, where we want to put it. Boyfriend has built most of our little walk-in-closet. Now to put up a curtain and buy one more small dresser We've lived with the office long enough to know its pros and cons. We still haven't painted the living room, but we bought the paint, so that's one big step in the right direction. Slowly, slowly but surely, progress is being made.

Would I like to be a bit more settled, three months in? Yes. Certainly. But the level of settled we are, as long as we keep pushing forward, is livable... For now.
Posted by Unknown at 9:19 AM