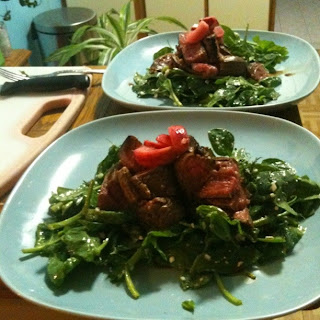 Can you believe, gentle readers, that your MatchGirl and Boyfriend are embarking on week TEN of menu plans? Nope. Neither can I.

I'm not going to lie, while I find it mostly helpful - especially when putting together the grocery list and trying to count our pennies - I wonder if it is slightly repetitive. Week Nine was a week without a plan, in all reality. We did the barest of grocery shopping as we were barely home. We both had events on various nights. We went to a backyard barbecue on Saturday. Sunday Boyfriend worked and I had brunch with a friend in town from Boston. And, even though I had planned on finding inspiration at the greenmarket in McCarren, I really didn't.

As I type this, I have potatoes boiling and a cheap cut of steak marinated in some past-it's-prime for drinking red wine. Not the summery pasta I had originally envisioned.

Thursday: It's Social Media Day (yes, that's a real thing) and your MatchGirl needs to pop into the event at Brooklyn Bowl for a bit. Boyfriend is going to make some Le Gamin inspired sausage sandwiches.

Friday: Boyfriend says he is going to make a "real California burrito"...

Saturday & Sunday Boyfriend is on his own as your MatchGirl is off to Puerto Rico for the Holiday weekend with a couple of her girlfriends. And Menu Plan: Week Eleven will be a treat - as it will be planned by Boyfriend while I'm away! Look for it after the July 4th Holiday.
Posted by Unknown at 9:19 AM