Life At Best Is Bittersweet 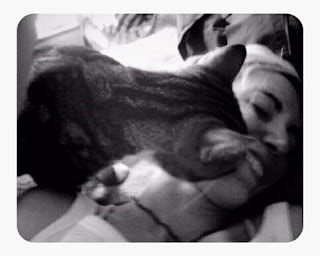 You learn a lot about your significant other, gentle readers, when something bad happens. When you go through a stressful time.

This weekend was a bittersweet one for Boyfriend and your MatchGirl. On Friday, as you are all well aware, we moved house. It was a stressful time for me, leading up to the big move. I had been in my previous apartment, on the north end of Manhattan Avenue in Greenpoint, for 6 1/2 years. It's the place I moved into when Jenn and I first moved to New York from Boston in 2004 and it's where I've lived ever since. And, while I was beyond ready to leave the place (the crazy leaky ceiling alone was enough, but there are plenty of other issues with that flat) it was still really hard for me. Purging some stuff, and saying goodbye to an old life, as you prepare for a new, and what you know is going to be better, life is simply a very stressful thing.

On Friday morning, super early, we drove my little cat Jarvis over to the new place. He had been acting pretty stressed out, but normal - playing and eating and running about - in the days leading up to our move. On Friday, April 1st, we left him in the bedroom of our new place, with his toys and his food and his litter box and I kissed him and petted him and told him we'd be back soon.

After the movers (the fabulous Intense Movers) finished, we made an Ikea and a hardware store run and then went back to our apartment and set about cleaning and painting the kitchen. Jarvis was acting melancholy, but he wandered about, though he spent most of the day hiding behind the mattress, propped against a wall. In the evening time, he came out and sat next to me in the kitchen as I painted and he followed me like a puppy into the bathroom when I went to take a shower and get ready for bed.

He was still there when we awoke in the morning. He was docile as I picked him up and brought him into bed with us. I whispered that everything was going to be OK and that Boyfriend and Jarvis and I were a family and it was all going to be just fine.

Jarvis wasn't acting right, so we took him to Greenpoint Veterinary Hospital, where Dr. Seaman was reassuring, but it didn't matter. He passed away an hour later. His heart stopped.

Here is where I talk about Boyfriend. And the kind of man he is.

When Dr Seaman phoned to tell me the bad news, dear ones, your MatchGirl was, to say the least, devastated. I broke down in tears and handed the phone to Boyfriend, who took care of everything. Who took care of me.

Now, the first time Boyfriend slept over, in the middle of the night, Jarvis decided it would be a really good idea to piss on Boyfriend's shirt, which had been discarded on the bedroom floor. He was possessive of me, my little puppy-cat and that was his was of showing Boyfriend who the real man in my life was. And Boyfriend could have hated him for it. He could have always held it against him. But he didn't. He loved Jarvis as though he was his very own. He was excited about our little family of him and me and Jarvis and our new life together.

When I collapsed with grief, my friends came out of the woodwork to take care of me and check in on me and just call to say hi. They are good friends and I am a lucky - a very lucky - woman to have them in my life. And Boyfriend, though he is also grieving, has stayed strong and by my side, holding me when I feel sad - like when we came home from a trip to Target last night and there was no little cat to greet us - and letting me cry and letting me know that it's not silly to feel so heartbroken.

I already knew that Boyfriend was the man for me, before, even, he brought up living together. And going through this rough time, seeing how he has reacted, how sensitive he is - in himself and to my needs - has only cemented that knowledge.

Jack Kirby said, and I read it in a comic book some time in the early 90s, "Life at best is bittersweet." Gentle readers, how very true that is. And how hard it's been hit home over these past few days.
Posted by Unknown at 10:57 AM