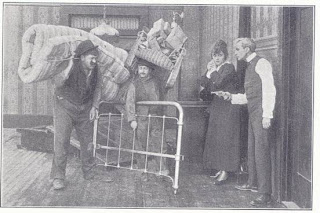 One of the things your MatchGirl decided long ago was that she could not possibly move her stuff on her own, one more time. There comes a point in your life (for me it is now, at 35 years old), when it is simply too difficult to motivate a group of your friends with promises of pizza and beer.

The first call left me shocked and a bit appalled. I spoke with a rep from FlatRate Movers on Saturday morning. I had filled out a form online the previous afternoon and waited for their call. First things first, they were very disorganized. The woman who called me asked me all the same questions I had already filled out on the form - what was the point of my having taken the time to fill out the form? - and then she proceeded to transfer me to a gentleman who thought that I was calling him and asked me all the same questions that the woman had asked me, the same questions from the online form I had filled out the previous day. After about 2 seconds of conversation, the man gave me a quote.

Yes. Eight hundred and fifty dollars. To move a mattress, a wing chair, some boxes, a couple small breakfast tables (with coordinating dining chairs) and a dresser approximately eight blocks.

Now, I know one can't put a price on not having to carry ones own boxes, but, seriously? That price strikes me as a little much.

Will be calling the movers who my friends and acquaintances have referred over the course of the next few days. Hopefully one of them will not only be more reasonable, but more realistic as well.
Posted by Unknown at 9:11 AM