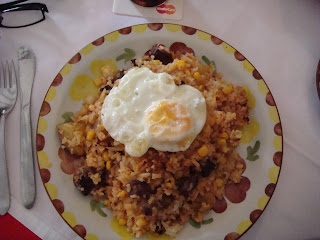 Gentle readers, your MatchGirl has just returned from Bogota, so this menu plan is being made on the fly, before a trip to the grocery. Bear with us!

Tueday: I'll be attending the Community Manager Meetup One year anniversary party, so I'll eat ... something and Boyfriend will eat alone.


Wednesday: Rissotto, we're not sure what kind yet... something befitting the end of September, in the 70° weather...

Thursday: Boyfriend wants to try his hand at Matzoh ball soup. He had it for the first time (ever!) at Eisenberg's not that long ago and now he's hooked (and made his own stock).

Sunday: A casserole of some kind. Thinking brown rice as opposed to pasta, as we're both feeling a few extra pounds these days...
Posted by Unknown at 9:19 AM