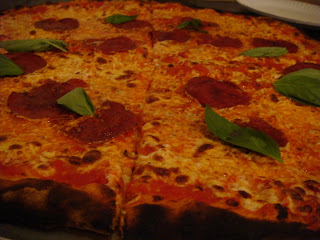 As the weeks have passed and the summer has become even busier than the spring, your MatchGirl and Boyfriend are having a rough time not only keeping up with the menu plan (ie. staying on track - last week was fairly abysmal in that respect and Sunday night, instead of a big Sunday dinner as originally planned, we hightailed it to Giglio Fest in Williamsburg for some carnival food - very summer-time appropriate, but less than on target with the plan), but with finding inspiration. While we both have go-to-dishes, making those over and over ... it can get a little drab.

For this week's plan, I thought it would be fun to get inspiration from elsewhere, so I looked to the recently launched Gojee (which, you should all immediately sign up for!) to inspire us for the week.

Monday: Pasta with red sauce (Boyfriend made some really good sauce and its been in our freezer)

Tuesday: Forecast calls for 95° Fahrenheit! We'll have a Salad Nicoise

Sunday: We're going to support Team Kristin at the Ice Cream Takedown, so I'm not sure we'll have room for a proper dinner!
Posted by Unknown at 9:19 AM