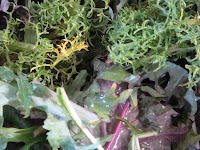 Week two, gentle readers, of meal planning, did not go so well for Boyfriend and your MatchGirl. We had a very busy weekend, with friends in town, friends leaving town and your MatchGirl's crew's traditional Easter celebration. To make things even tougher, looking at the week, your MatchGirl had plans after work nearly every day.

A rough Monday work day left me curled up under the covers in our cozy bedroom pretty much the moment I arrived home from work. Boyfriend had a late work meeting and came home, made me a cocktail (thanks to Jenn and Mark for the Michter's!) and I went to be without any supper.

Tuesday I had plans and got home too late for dinner. Boyfriend made me a scrambled egg at 11PM and then we went to bed.

Wednesday was a great eating night, though none of it at home! My friend Liza was celebrating her second James Beard Award nomination with a big potluck at a nearby beer hall. We went home after we stuffed ourselves with all sorts of great vittles, good beer and amazing conversations.

Thursday Boyfriend worked and your MatchGirl had dinner at Enid's with her college roomie and her family. We followed up a swell dinner with a stop at the brick-and-mortar Van Leeuwen Ice Cream store.

Friday, though, we made dinner together before heading out to the birthday party of my dear friend Miss V. We whipped up a yummy pasta dish with raviolis from Trader Joe's, some toasted walnuts and shredded Brussels.

Saturday was the wedding of two of our very dear friends, resplendent with a slider bar (and lots of ketchup for the bride!) and some yummy passed hors d'oeuvres. Of course there was also a ridiculous amount of wine, so we stopped for some pizza on our way home, around 2AM.

Sunday night, though, brings us back to a meal plan and to being on track- both health-wise and financially. As you can tell by the Friday posts, there's a lot of stuff we want... and the best way to stay on top of our spending is to make sure we pay attention to what we spend on groceries, and what we spend on lunches during the work days.

So, Sunday I went shopping, menu plan in mind (though I lost the grocery list somewhere between writing it, going to brunch and heading to the grocery store, the careful list I'd put in my back pocket disappeared. I think, though, I did pretty well, and Boyfriend can pick up the rest of the stuff today (he won't mind). Here's the plan:

Monday: Trying for meatless Monday, so we'll go for a take on this pasta dish with burst tomatoes and wilted frisée.

Tuesday: Boyfriend is in charge. A roast chicken will be a great dinner and provide us some lunch meat and some food for the rest of the week.

Wednesday: Stir-fry. My favorite thing about stir-fry or fried rice is that I can throw a bit of whatever we have leftover from earlier in the week, or the week before, into it and it's tasty and satisfying. A little scrambled egg adds some protein if there is no meat around.

Friday: I'm not sure yet. Boyfriend might have plans after work, in which case I'll have a simple supper solo or go out with a friend.

Saturday I plan on going to the Farmer's Market near McCarren Park in the morning and sussing out what's beautiful and fresh - and using that as inspiration for next week's meal plan.

What do you think? Do you make a meal plan in advance?
Posted by Unknown at 9:19 AM