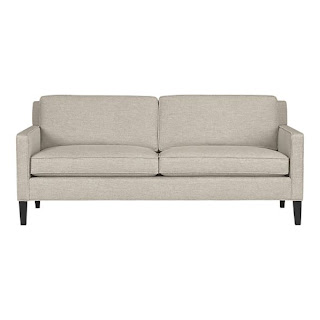 Gentle readers, while your MatchGirl had her heart set on the modern looking Corona sofa from Macy's (and only after Boyfriend took her to look at it in person), Boyfriend has stayed on the hunt for a similarly styled sofa, but perhaps at a cheaper price.

To that end, he trolled Craigslist, keying in sofas he liked, and knew the names of. He went to stores to look at the sofas in real life before even contacting the sellers, so as not to waste anyone's time. And he came across a listing that said: Crate & Barrel Vaughn Appartment [sic] Sofa - $250 (Midtown West). Now Boyfriend knew the Vaughn sofa. Boyfriend liked the Vaughn sofa. Your MatchGirl, on the other hand was not so sure. But I agreed that the price was too good to pass up and off Boyfriend went to look at the sofa.

Boyfriend loved the sofa. The fabric was great. It was a few years old, but in perfect condition. The woman who was selling it was the first and only tenant in her apartment and the sofa had been there less time than she had. Boyfriend made an offer. And she agreed, via email. Your MatchGirl, though not exactly enthusiastic about the Vaughn itself, was excited, at the very least to have some furniture - a place to sit and relax and to start really pulling together our home.

Then came the email.

I am sorry for this. Two of the people (they viewed before you) all offered $300 cash. One of them came today in the morning to pick up the sofa already. I appologize that I couldnot keep it since they called my super and gave $300 on the spot. Hope you can find a better sofa than this one.

Now, your MatchGirl knows that an email saying "Yes. I will sell you this sofa and yes, you may pick it up on Sunday" is not a binding contract. But Boyfriend engaged a van to take him to get the sofa. And he made sure to pick a time to go that would be most convenient for all involved. And Ms Chen decided that she would sell the sofa, for a measly $50 bucks more, to someone else, even though they made a later offer. Again, I know that anything goes on Craigslist, but one would hope there would be a modicum of respect.

And though I was not entirely excited about this particular couch, I had geared myself up that it was going to be awesome. Certainly better than no couch at all.